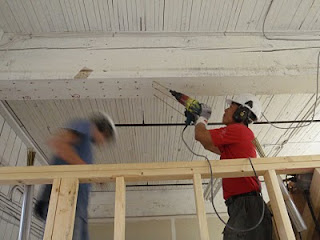 In May 2007 the Vancouver City Council approved major structural upgrades to the building located at 1122 SW Marine Drive and approved the appointment of Read Jones Christoffersen, (Vancouver, BC), as Consultant to prepare tender documents and provide project management support to remediate the structural deficiencies of the existing columns and beams. With technical support from UBC Wood Science, the structural engineers proposed that the project repairs would use the technology of ASSY VG Fully Threaded Screws to reinforce severely cracked beams to return the beams back to its structural integrity.